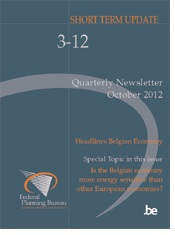 Since 2011Q2, economic growth in the euro area has been affected by the global slowdown and, above all, by the sovereign debt crisis. After negative GDP growth in 2011Q4 and 2012Q2, economic activity is expected to have contracted further in 2012Q3, resulting in a 0.5% decline in real GDP this year. A slight recovery is expected in the course of 2013, but annual euro area GDP growth should remain limited to 0.3%. This scenario remains highly uncertain as policy makers' decisiveness in tackling the euro crisis will be crucial to restore consumer and investor confidence.

Belgian economic activity should decline slightly in 2012 (-0.1%) due to adverse economic conditions in Europe and budgetary austerity. The recent development of consumer and business confidence suggests that Belgian economic activity should stabilize in 2012Q3 after a marked decline in 2012Q2. From 2012Q4 onwards, GDP growth should gradually pick up in the wake of a tentative upswing in the euro area and reach 0.7% on an annual basis in 2013.

Domestic employment fell in 2012Q1 and should only start to recover from the beginning of 2013 onwards. In 2012, the net increase in employment should amount to 11 000 units on average as it benefits from a favourable carry-over from 2011. In 2013, employment is expected to rise by 13 700 units. As employment growth falls behind the increase in the labour force for two consecutive years, unemployment is expected to rise by 9 100 units this year and by 24 000 units next year. As a result, the harmonised unemployment rate (Eurostat definition) for Belgium should rise from 7.2% in 2011 to 7.4% in 2013.

According to our most recent inflation forecasts, finalised at the end of September, Belgian inflation, as measured by the yoy growth rate of the national consumer price index, should cool from 2.8% in 2012 to 1.7% in 2013. This is mainly due to a slight decrease in the crude oil price, but also to the fact that some fiscal measures taken in 2012 will no longer affect yoy growth of consumer prices from the beginning of 2013 onwards.