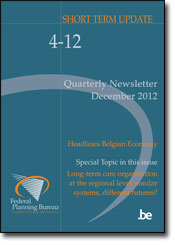 The FPB’s latest forecast dates from September and predicted, conditional on our traditional assumption of unchanged budgetary policy, a GDP growth rate of -0.1% in 2012 and 0.7% in 2013 for the Belgian economy. This forecast was established against a background of euro area GDP growth amounting to -0.5% and 0.3% for those years respectively.

The Belgian GDP flash estimate matched our forecast of zero qoq GDP growth in 2012Q3, and recent forecasts of the European Commission (October) and the OECD (November) were in line with the FPB forecast. National as well as international leading indicators (such as the Ifo, PMI, and the NBB business cycle indicators) are tentatively stabilising, implying that a modest recovery for the euro area as a whole and for Belgium in the course of 2013 remains plausible.

We have not yet estimated the economic impact of the Belgian government’s decisions taken in November (which are summarised in the “policy measures” section on page 21), but expect it to be quite small. The federal government’s effort to reduce the budget deficit to 2.15% of GDP in 2013 focuses on measures of which the impact on economic activity should be limited.
Important risks to the international scenario still remain. These encompass a new intensification of the European sovereign debt crisis, the possibility that the US economy will fall back into recession if the fiscal cliff materialises, and a surge in oil prices because of turmoil in the Middle East. Finally, additional fiscal consolidation efforts in the euro area could have adverse effects on short-term aggregate demand as there is evidence that fiscal multipliers are currently higher than in normal economic conditions.

Our next short-term forecast will be published in February 2013.