In line with the international business cycle, qoq GDP growth in Belgium slightly decelerated from 0.7% in the first quarter to 0.5% in the third and the fourth quarter. This year, quarterly growth should be between 0.4% and 0.5%. On a yearly basis, economic growth should slow down from 2.7% in 2007 to 1.9% in 2008. In 2007, the Belgian economy was driven by domestic demand. This year, domestic demand growth should decline markedly. Private consumption growth is expected to weaken as the slowdown in job creation, the more modest increase in wages before indexation, and the acceleration in inflation should all limit the growth of real disposable income. This will also affect housing investment, together with the increased mortgage rates. Business investment growth should also slow down in view of less favourable demand perspectives.

Export growth should be almost as strong in 2008 as in 2007 despite a slowdown in the growth of the relevant export markets. As a consequence, Belgian exports will keep on losing export market shares, but to a lesser extent. The combination of real import growth exceeding export growth and deteriorating terms of trade should reduce the Belgian current account surplus to 2.5% of GDP in 2008 as compared to 2.9% last year.

According to our inflation update of March, the increase in the national index of consumer prices should accelerate to 3.5%, after 1.8% in 2007. This acceleration is mainly due to substantial price increases in energy products and in processed food items (especially cereal and milk products). [STU 1-08 was finalised on 7 March 2008]

Are Belgian price stability and purchasing power at stake?

Belgian inflation increased from 1.1% in August 2007 to 3.6% in February 2008 due to a combination of energy price and food price rises. Consequently, concerns surfaced about households’ purchasing power on the one hand, and about the possible threat of Belgian automatic indexation to price stability and external competitiveness on the other hand. This Special Topic sheds some light on these issues and briefly assesses some measures meant to alleviate the impact of the increase in energy prices.

The graph below provides an overview of the evolution of oil prices (expressed in local currency) and Belgian consumer price inflation. As many factors determine the evolution of inflation, this graph provides only a partial insight. However, it allows a split of inflation developments since 1980 into three periods, each with different characteristics. In the first part of the eighties, the Belgian economy suffered from a combination of low economic growth and high inflation caused by the oil price hike in 1979-1980. Average inflation was far lower during the second period (1985-1994). This was due to the decline in oil prices and to a significant decline in underlying inflation, to which the policy of wage restraint that accompanied the devaluation of the Belgian franc in 1982 contributed. Since 1995, average inflation has been lower than between 1985 and 1994, despite the continuous increase in oil prices. This is due to a further decrease in underlying inflation that has been kept in check remarkably well over the last ten to fifteen years, in view of oil price developments.

Inflation should reach 3% on average in 2008, the highest rate since 1991. This does not imply a return to the situation of the first half of the nineties. In that period, inflation amounted to almost 3%, while oil prices were on a downward path. Compared to the average of the period 2005-2007, however, the anticipated inflation rate for 2008 seems higher than one should expect on the basis of the oil price evolution. This is due to three factors that will each add 0.2%-points to inflation in 2008. Firstly, prices of (processed) food should increase substantially faster than during previous years. Secondly, distribution tariffs for gas and electricity went up considerably in January 2008. Thirdly, the two most important gas suppliers raised their tariffs in the last quarter of 2007. It should be stressed that the impact on inflation of the last two factors is not directly related to the rise in crude oil prices. As the acceleration of inflation in 2008 is mainly explained by these factors, inflation should - in the absence of strong oil price fluctuations - return to a level that is close to underlying inflation in 2009. 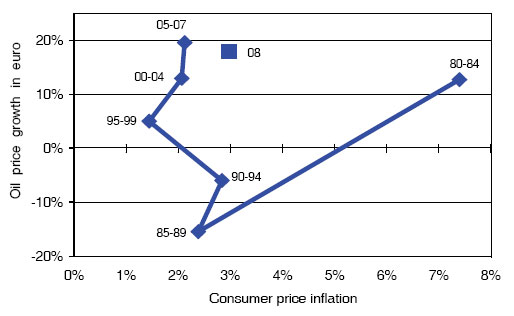 Belgium and Luxembourg are the only European countries that have a generalised automatic indexation of wages and social benefits. In Belgium, this system was modified in 1994 by linking wages and social benefits to the so-called health index (which does not take into account the price evolution of alcoholic beverages, tobacco products and motor fuels) instead of the CPI.

From a macro-economic point of view, households’ purchasing power is influenced by evolutions in employment and unemployment, real increases in wages and social benefits, price effects and other factors such as taxes and property income. An automatic indexation of wages and social benefits offers the advantage that this part of households’ purchasing power is only slightly affected by unexpected price movements. The existing indexation mechanisms do not entirely protect purchasing power for three reasons. Firstly, as the health index takes prices of energy products for heating and lighting into account but neglects prices of motor fuels, losses of purchasing power typically appear in periods of oil price rises. Between 1994 and 2007, the annual increase in the health index was on average 0.15%-points lower than the CPI, resulting mainly from the rise in oil prices during that period (by 11% per year on average). The year 2008 will not be exceptional from this point of view as the health index should increase 0.2%-points less than the CPI. Secondly, the Belgian CPI and health index are based on the expenditure pattern of “an average household”. It does not come as a surprise that the poorest households, compared to richer households, spend relatively more on basic goods (such as food, heating, lighting etc.) and less on luxury goods (such as cars, cultural activities etc.). Even with an automatic indexation mechanism, the increases in prices of food and energy (for heating and lighting) between August 2007 and January 2008 reduced the purchasing power of the poorest 20% of households by 0.2%, while purchasing power of “an average household” should not generally be affected by these factors. Thirdly, various indexation mechanisms exist in Belgium1, but they are all discontinuous. This implies that households suffer losses of purchasing power between two points of indexation. In the graph below, these losses are indicated by the blue triangles2. 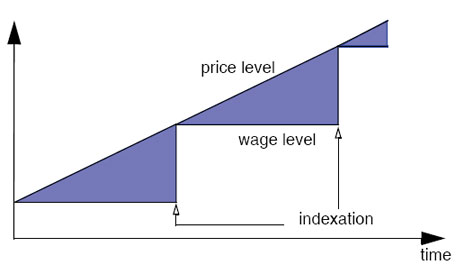 In as far as wages in competing countries are not automatically indexed to prices, Belgian automatic wage indexation can be detrimental to external competitiveness in the case of an unanticipated acceleration of inflation. Nevertheless, Belgium adopted a unique system in 1996 to prevent and correct competitiveness losses that are due to wage developments: the so-called “Law on employment promotion and preventive safeguarding of competitiveness”. This law states that Belgian nominal wages should develop in line with the average of our three neighbouring countries. To achieve this, the CRB/CCE provides a yearly report in which Belgian private sector wage developments are monitored and compared to those in our neighbouring countries. On the basis of these reports, the social partners set an indicative wage norm once every two years at the start of wage negotiations at sectoral and firm level. Moreover, so-called “all-in agreements”, which are becoming more popular in sectoral wage negotiations, provide another way to deal with unexpected wage pressures that could endanger the export competitiveness of Belgian firms. These agreements introduce a corrective mechanism if indexation turns out to be higher than anticipated during the wage negotiations. At the end of this year, the CRB/CCE will have to evaluate to what extent the current acceleration in inflation has deteriorated Belgian external competitiveness and, if necessary, propose a correction to the social partners.

The average Belgian household’s purchasing power is protected against price increases in gas, electricity and fuel oil for heating through automatic indexation. Due to their consumption pattern, low income households suffer more from energy price hikes than high income households (cf. supra). In reaction to the continuous increase in oil prices, the Belgian government decided to set up a fuel oil fund in January 2005 that provides financial support to low income households to buy fuel oil for heating. The conditions for having access to the fund have been eased from January 2008 onwards. The fund offers the advantage that it is targeted at the income groups that suffer most from energy price increases at a relatively low budgetary cost (around 45 million euro per year). Certain low income groups that use electricity or gas for heating have the right to consume these energy products at the social tariff (i.e. the lowest tariff that is in use in Belgium).

Some assess these targeted measures as insufficient and argue for a reduction of VAT tariffs levied on energy products for heating from 21% to 6%. As this measure would not be targeted at specific income groups, it would have a positive effect on the purchasing power of all households, even “the average household”, for which purchasing power should be protected by the automatic indexation mechanism. A simulation with the HERMES model for the year 2008 shows that such a measure would increase households’ purchasing power by 0.2% and lower wage indexation by 0.8%; the latter reducing companies’ wage costs and improving Belgian external competitiveness. These factors would have a slightly positive impact on GDP (0.1%), but the measure would imply a significant worsening of the government budget of somewhat more than 500 million euro. This measure would also lead to an increase in energy consumption, which seems highly undesirable in an era characterised by policies aimed at reducing greenhouse gas emissions.