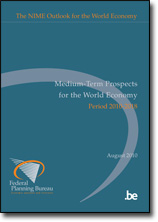 At the time of writing, and although certain segments of financial markets do not yet seem to have returned to their normal, pre‐global financial crisis, functioning, it appears that the wide‐spread and massive policy initiatives of the past year have managed to avert any systemic financial meltdown and limit the depth of the world‐wide recession. Indeed, monetary policy, financial policy, the fiscal stimulus plans that began to be implemented in 2009 and the simultaneous boost from countries’ automatic fiscal stabilisers, all managed to limit the scale of the downturn in real GDP and employment levels. The downturn is also thought to have been limited in OECD countries due to the unexpected resilience of GDP growth in emerging market economies such as China, Brazil and India, who helped to prop up OECD activity by helping to contain the decline in world trade.

In early 2010, policy has remained supportive on all fronts, fiscal, monetary and financial. However, with respect to fiscal policy in particular, after the massive public interventions of 2009, the time has come to look at the effects that these initiatives have had, both in terms of their support to the economy, but also in terms of their effects on countries’ budget deficits and debts and the exit strategies. A difficult balance must be struck between the necessary continued public support for the economy as long as output gaps and unemployment rates remain high, and the medium‐run adjustments to public deficit and debt trajectories.

The current scenario is one where governments withdraw public support from the economy gradually without compromising the recovery. Over the medium term, public deficits do not explode. Real GDP growth picks up as the private sector begins to drive the recovery. In the euro area, we see the emergence of structural current account surpluses. In the United States, there is low inflation and a rebalancing of the current account deficit. In Japan, unfavourable demographic trends lead to low GDP growth; furthermore, the country is projected to continue down a path of deflation throughout the projection period.