Transdisciplinarity and the governance of sustainable development (22/12/2005)

The HTML version of the article above usually does not contain all information held in the PDF version. For a full version (including charts and tables), please download the PDF version available in the box 'PDF & download' on the top right side.

Many questions about the directions in which our societies develop require answers from the authorities. Guiding this development requires an overall vision of the situation, which can be obtained by systematically organising the available social, environmental, economic and political information. The third Belgian Federal Report on Sustainable Development proposes such a comprehensive systemic model for describing and analysing how a given society develops.

The name of this model is TransGovern, short for Transformation of living conditions through Governing. It refers to the interactions (shown by the grey arrows between the two main boxes in the Figure below) between the transformation of living conditions in a society (the left-hand box) and the political decisions (the right-hand box) aimed at promoting a sustainable development. This model also represents the relationships between the main components that determine our living conditions as well as between the various components of the political decision-making process. This article further describes the main features of TransGovern, as well as its first application as a framework to structure the analysis of the development of our society. 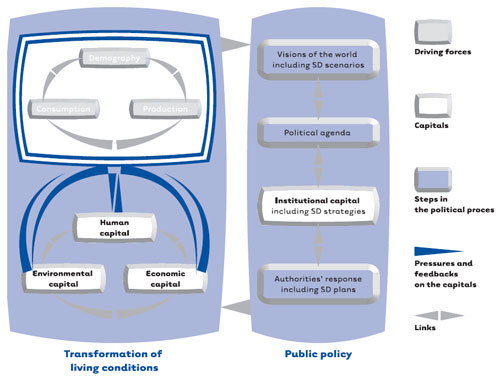 TransGovern is a combination of several existing models. It combines the concepts central to the DPSIR framework (Driving forces, Pressures, States, Impacts, Responses), developed at the OECD, and the triangular model of interactions between the three basic development capitals (human, environmental and economical). The TransGovern model adds the institutional capital to these and places it at the core of an original public policy module, thereby following an approach to the political decision-making process that was developed earlier by the authors of the model. This political component is compatible with the theory on human, environmental and social risks put forward by the Dutch Scientific Council for Government Policy (Duurzame risico’s: een blijvend gegeven,Wetenschapelijke Raad voor het Regeringsbeleid, 1994) which already served as a basis for the scenario analysis in the first two Federal reports.

The evolution of well-being within a society depends on the human, environmental and economic resources that it can access. These resources constitute capitals, the accumulation and interactions of which determine how development evolves in that society. Human capital is subdivided in three sub-capitals: the standard of living (material well-being), health (both mental and physical) and knowledge/capacities (what individuals know and are able to do).

Environmental capital includes, on the one hand, natural resources (water, air, land and mineral resources) and, on the other hand, the biosphere with all its biological diversity.

Finally, institutional capital is the set of organisational, legal and social structures that characterise a country’s governance and that determine how far people can engage in civil society and to what extent conflicts can be peacefully resolved.

The first set includes the dynamics of demography. Trans- Govern emphasises demographic structures and their variations and determinants (fertility, mortality, net immigration). Changes arising in those structures have a significant influence on development, even if it can only be perceived in the long term.

The second set of driving forces comprises the acts of consumption. Consumption patterns refer to the different ways that households meet a need (e.g. mobility) by using goods (e.g. cars and fuels) or services (e.g. public transport) and their habits in doing so.

The third set of driving forces comprises the acts of production. Production patterns refer to the different ways through which producers generate an offer on the market of goods and services.

The driving forces exert their influence on the human, environmental and economic capitals through pressures (shown in the Figure by dark, downward arrows). Each pressure originates from one driving force and modifies the state of one capital.

For example, a growing population can increase the exploitation of natural resources, therefore decreasing the stock of that capital. Pressures on the capitals can be either positive or negative. Investments in new production equipment are an example of positive pressure on the physical capital.

Changes in the state of one capital can have impacts on the state of the other capitals. Those changes also produce feedbacks on the driving forces (shown by the dark upward arrows in the Figure). For example, a change within the sub-capital “health” can have an impact on each of the three driving forces considered in the model.

A pressure exerted by a driving force on a capital can thus make the whole array of living conditions evolve, as there are many connections between the various components of those living conditions as well as within them.

In order to manage the development of a society, policies are needed that can have an impact on the transformation of living conditions. The production of political responses and strategies is particularly required when pressures cannot be regulated by the interactions within this area (represented in the left-hand box), e.g. by market forces.

Political responses (represented by the arrow that goes from “Public policy” to “Transformation of living conditions”), can focus on any component in the left-hand box.

Such responses depend on the information that public authorities get (represented by the arrow that goes in the opposite direction, from “Transformation of living conditions” to “Public policy”).

However, the available knowledge will never be sufficient to support all responses of the public authorities. In such a situation, visions of the world and the perception of existing risks play an important role. These are subjective elements that are influenced by norms, values and political priorities. The authorities’ capacity to materialise the items on the political agenda into political responses depends on the institutional capital, i.e. the state of the country’s organisational, legal and social structures.

The third Federal Report on Sustainable Development highlights some twenty pressures that characterise the current and future development of our societies. It shows that if current trends persist, these pressures may generate obstacles to a sustainable development. The Trans-Govern model is used to analyse how these pressures modify living conditions. It helps to organise the complex changes brought about to by these pressures and their impacts – direct and indirect – on the various components of the model.

TransGovern can, for example, help to organise the interactions linked to household appliances. The use of these appliances consumes energy and generates a pressure on the environmental capital, in particular through pollution.On the one hand, their use is rising, following, in particular, changes in family structures (demography) –i.e. the increasing number of one-person households and single-parent families – which increase the equipment rate and their use, and thus energy consumption.On the other hand, the same changes in family structure (demography) increase the risk of poverty (human capital), which is more prevalent in single-adult families.Since poor households will often buy cheap, low quality appliances, which are energy inefficient and costly to use, this will indirectly increase the amount of energy used by households and the pressure on the environmental capital.

According to this analysis, a policy to reduce households' energy consumption should not only provide guidance for the energy efficiency of appliances, but should also consider the purchasing behaviour of the various household categories. Such policy could also contribute to poverty-reduction policies.

This example illustrates the complexity of interactions that must be taken into account in a sustainable development analysis, and how TransGovern can help in this task. This example, as well as nineteen others, is detailed in the third Federal Report on Sustainable Development. This Report concludes, in particular, that there is a need for more integration in policy analysis and development and for accelerated development of integrated information tools such as TransGovern.