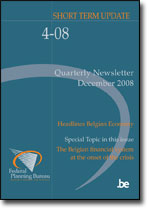 The FPB has revised its medium-term outlook for 2008-2013 for the Belgian economy. For the 2008-2010 period, the outlook adopts the international economic scenario provided by the OECD outlook of November 2008. The uncertainty surrounding the results is exceptionally large and downside risks could prove to be greater than upside risks. The greatest downside risks include a longer than expected period of distress on financial markets, and that emerging markets could be hit harder than anticipated.

After dynamic growth in 2007, private consumption expansion should be much more limited in 2008 and 2009. From 2010 onwards, household demand growth should increase gradually and then stabilise at a rate close to 2%. After dynamic growth in 2008, gross fixed capital formation should slightly decrease in 2009, before recovering in 2010 and increasing by 2.4% on average during the 2011-2013 period. Given the unfavourable international environment next year, exports are expected to decrease in 2009. Over the period 2010-2013, exports should increase by 4.4% on average and the contribution of net exports to GDP growth is expected to be slightly positive.

The worsening of the economic situation should lead to a decrease in employment in 2009. In the medium term, employment should increase again, at a yearly rate reaching 0.8% at the end of the projection. With employment growth heavily affected by the adverse economic situation in the short run and in view of the increase in the labour force, the unemployment rate (broad definition) will soar to 12.9% by 2010 (against 11.9% in 2008), before levelling off at around 13.2% from 2011 onwards. Total administrative unemployment should stand at almost 700,000 persons in 2013 (65,000 persons more than in 2007).

The Belgian financial system at the onset of the crisis

The financial system is a set of institutions that assume different functions in savings intermediation under specific prudential monitoring schemes. In the Belgian financial system, it is possible to distinguish the commercial banks, the investment banks, the collective savings management institutions, the insurance companies and the professional pension institutions (IRP), better known as pension funds. At the onset of the crisis described in the Short Term Update of November 2008, the structure of the Belgian financial system, given in Table 1, was the result of deep mutations since the beginning of the nineties as consequences of the achievement of the single European financial market.

Under increasing competitive pressures, a large movement of concentration has occurred inside the Belgian financial system, often via mergers and acquisitions. Important changes among shareholders have also been observed. Over the last 15 years, the number of institutions has decreased but the foreign presence, mainly from other Member States of the European Union, has increased. The increase in foreign presence has not always taken the form of new establishments in Belgium, as illustrated by the number of insurance services delivered without physical outlets. Finally, in 2007, the Belgian financial system was dominated by 4 international financial conglomerates covering services offered by commercial banks, insurance companies and investment banks. In 2006, they accounted for 80% of banking assets and almost 50% of insurance premiums.

The rapid development of the financial sector is also underlined by the evolution of the Belgian financial deepness indicators. Banks’ credit outstanding to the private sector GDP doubled between 1990 and 2006, reaching 0.78. However, its relative importance has remained largely below that observed in neighbouring countries such as France (0.94), Germany (1.09) or the Netherlands (1.69). This observation is partly explained by the role of the financial institutions in public sector financing. Indeed, the ratio of total assets of commercial banks on GDP gives a better picture of the development of the Belgian banks in the European environment. In 2007, this ratio reached 3.9 in Belgium, as against 3.1 in Germany and 3.8 in France and in the Netherlands2. The impact of public financing is also visible in the development of the bond market. As a ratio to GDP (1.27), this market is one of the most developed in Europe, but mainly under the impulse of bonds that constitute the public debt. Indeed, the ratio of bond capitalisation of the private sector to GDP (0.34) shows a private bond market of the same  importance as that of Germany (0.35) and far below that of the Netherlands (0.66).