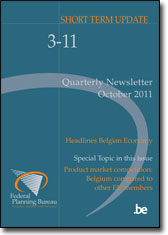 Euro area economic growth slowed down substantially in 2011Q2 (0.2%), after a vigorous 0.8% in 2011Q1. The economic slack is expected to continue during the rest of this year due to the weakening in world trade growth and a major decline in consumer and business confidence. Under the assumption that financial market tensions, which are driven by worries about Europe’s sovereign debt, recede towards the end of this year (i.e., if European monetary and fiscal policy makers can restore calm), quarterly GDP growth should accelerate gradually in the course of next year. However, even then, euro area growth should not exceed 1.2% for 2012 as a whole. However, if the turmoil in financial markets persists or worsens, households and businesses could further reduce their spending and European banks could face (additional) losses on their holdings of sovereign debt. This would endanger any economic recovery.


The global economic slowdown should have a significant impact on Belgian GDP growth in the second half of this year (0.2% per quarter on average). In our baseline scenario, quarterly growth should gradually recover in the course of next year. On a yearly basis, however, this would lead to a deceleration in GDP growth from 2.4% in 2011 to 1.6% in 2012.

Domestic employment rose sharply between 2010Q1 and 2011Q1. In the second half of this year and in the course of 2012, far fewer jobs are expected to be created, owing to the economic slowdown. Backed by a favourable starting point, employment should still increase by 54 200 units on average in 2011. In 2012, net job creation should remain limited to around 30 000 units. The number of unemployed should still decrease by 23 600 units this year, but rise by 9 500 units next year. As a result, the unemployment rate (Eurostat definition) should rise from 7.3% in 2011 to 7.4% in 2012.

Our most recent inflation forecasts were finalised at the end of September. Belgian inflation, as measured by the yoy growth rate of the national consumer price index, should accelerate to 3.4% on average this year (compared to 2.2% in 2010), mainly as a result of higher crude oil prices. According to futures market quotations, oil prices should remain below their peak levels of April 2011. This should bring consumer price inflation down to 1.8% on average in 2012.

Belgian competitiveness with respect to its neighbouring countries is being hampered by growth in hourly wages that is insufficiently compensated by productivity growth. In particular, total factor productivity (TFP) growth, which should indicate technological progress, is falling behind that of its neighbours. Among the determinants of TFP growth, competition can play an important role. According to certain performance measures, however, competition in Belgium may be weak when compared to other EU countries. Although conditions are improving, they are doing so in many other Member States too. Therefore Belgium’s relative position is not changing a great deal. A further improvement could thus be vital from a policy point of view, expecially since this does not, generally, hurt the budget.

Competition should stimulate producers to improve their efficiency. The most efficient of them might gain ground against the less efficient, some of whom might even leave the market. This should make an industry’s productivity increase. There are, however, circumstances that can make the opposite happen. For example, very intensive competition involves the risk that investments in efficiency are not earned back; or producers who are technologically behind may be discouraged to invest. Still, there is a wide consensus that competition and productivity are positivily related. Improving the intensity of competition could thus enhance TFP growth. Other determinants of TFP, as put forward by the literature, may be R&D, human capital, technology diffusion, and international trade.

Since competition is a complex phenomenon, its measurement is not a straightforward task. It is done by assessing certain of its features. Eight of these were recently studied by the FPB and the results will be published shortly: entry and exit of producers in their markets; number of and dominance among producers (market concentration); variability of market shares; government intervention in markets; consumer price differences between countries; monopoly rents; sensitivity of profits to cost changes; and market penetration of foreign products. The assessment of each should reveal whether competition is relatively intensive in that respect. One should, however, be aware that these also have their limitations. There may be a certain ambiguity in interpretation, or data sources that do not match the theoretical requirements of the measure and/or are of limited quality. For these reasons the measures provide
a proxy of what they should measure from a theoretical point of view.

For each of the eight measures, Table 1 shows how Belgium ranks among the sample of EU countries for which the measures have been calculated. The samples are of between 7 and 26 countries and each includes a sufficient number of large economies. The ranking is based on averages over a certain period. These periods also differ, but typically run from the second half of the nineties to the second half of the past decade. [More in the publication]