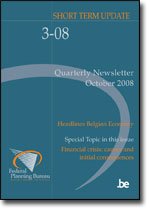 Since mid-September, the financial crisis has entered an exceptionally turbulent new phase. The US and European authorities have had to take extraordinary measures in order to deal with solvency and liquidity problems in the banking sector. As financial conditions are likely to remain difficult, it is obvious that the crisis will have large negative effects on the world economy, although the size of these effects is currently very difficult to grasp due to huge uncertainties concerning the magnitude and the duration of the crisis.

This uncertainty explains the volatility of most indicators, which makes it currently very difficult to establish credible economic forecasts. The latest short-term forecasts of the FPB were finalised in the first half of September, i.e. before the aggravation of the financial turbulence. According to these forecasts, Belgian GDP growth should amount to 1.6% in 2008 and slow down to 1.2% in 2009. The 2009 government budget is based on this outlook.

In the light of recent financial sector developments, the latest FPB forecasts should be revised downwards, in line with revisions of economic growth by national and international institutions. In fact, the weakening of economic growth in the course of 2008 will probably be stronger than expected, while the subsequent recovery could take longer to materialise and could lack strength. The channels through which the financial crisis is affecting the real economy are discussed in the Special Topic of this Short Term Update.

Belgian business and consumer confidence have dropped to their lowest level in more than five years due to weakening economic growth and the financial crisis, which are tending to reinforce one another. Moreover, consumer confidence has suffered from the high number of lay-offs in large Belgian companies. On the other hand, the decline in oil prices and the depreciation of the euro have limited the worsening of sentiment somewhat through their positive effect on households’ purchasing power and export competitiveness.

Inflation forecasts for 2009 have been revised downwards since September, which is the result of two counteracting factors. In fact, the downward effect of falling oil prices on inflation is partly compensated by the stronger than expected increase in underlying inflation. According to our end-of-October inflation update, the increase in the national index of consumer prices should slow down from 4.6% in 2008 to 1.9% in 2009.

During the summer of 2007, the combination of declining house prices in the United States and weakening economic growth made the initial problems in the financial sector surface. Although the costs of the financial crisis were immediately estimated at several hundred billion USD, it was thought that the probability of worldwide contagion in the financial sector, initiating a serious slowdown of the world economy was relatively limited. Since then, the financial crisis has turned out to be the most severe since that of the 1930s and has spread throughout the world. This Special Topic will give an overview of the causes and the consequences of the current financial crisis.

During the ‘90s, financial sector legislation changed profoundly. Financial institutions were allowed to combine activities such as deposit banking and investment banking, which had been required to remain separate before. At the same time, financial institutions started to create new products in order to compensate for the profit squeeze they faced due to disintermediation and increased competition in the banking sector.

The most important innovation in the light of the current financial crisis was the securitisation of mortgage loans. In this process, banks do not keep the mortgage loans on their balance sheet as such, but bundle them in so-called mortgage backed securities (MBS), which are sold to investors. These MBS are often repackaged i.e. split up and merged with other loans to form asset backed securities (ABS). In a next step, ABS can be divided into tranches and regrouped to create collateralised debt obligations (CDO), which can be repackaged further. Hence, financial institutions bought groups of securitised assets of which the quality was particularly difficult to assess as the underlying assets were a mix of subprime loans (loans with a high default risk) and higher quality debt. Generally, however, these financial products were assigned high ratings and were thus not considered as risky investments. In fact, even subprime mortgage loans were not seen as particularly unsafe because the price of the collateral (houses) was expected to continue to rise. Moreover, most CDO were covered by credit default swaps (CDS), allowing the CDO holders to sell their securities at a predetermined price in case of default, which reduced the perceived risk even further.

As a result, balance sheets of financial institutions were filled with assets of which the quality turned out to be lower than was perceived before the financial crisis. This implies that banks granted more loans than they should have done had they correctly assessed of the risks related to their assets.

Decline in US house prices initiated the financial crisis

In the second half of 2006, the US business cycle entered a declining phase, an increasing number of households defaulted on their mortgage loans and house prices initiated a downward path. Consequently, institutions that depend heavily on mortgage loans faced serious problems. America’s mortgage giants Fannie Mae and Freddy Mac had to be nationalised in September 2008. Moreover, the value of MBS and related derivatives declined rapidly and many CDS had to be honoured, bringing the issuers of CDS into difficulties as their capital base was too low to meet all claims. This caused the bankruptcy of Lehman Brothers and the bail-out of AIG (the world’s largest insurance company) by the US government. This sent a shockwave through the international financial sector as a part of the structured products on banks’ balance sheets risked becoming worthless in case of default. This forced banks to write down (part of) their investment portfolio, which compelled them to rebuild their capital bases by means of new equity issues.

Effects on the financial markets

In order to reassure bank clients and to mitigate the risk of a bank run, which would cause serious liquidity problems in the financial sector, deposit insurance levels have been raised worldwide. In the European Union, the minimum insurance was raised from EUR 20,000 to EUR 50,000. Belgium and some other European countries opted to raise the threshold even further to EUR 100,000.

The pessimism of financial market participants has led to a so-called “flight to quality”, which occurs when equities and corporate debt (commercial paper and corporate bonds) in investment portfolios are massively replaced by safer investments (treasury bills and government bonds). This has triggered a decrease in interest rates on debt issued by governments while rates on corporate debt have gone up, implying a noticeable increase in the corporate bond spread (difference between interest rates on corporate and government bonds). The fact that even very creditworthy corporate borrowers in the US recently found it impossible to sell short-term debt illustrates investors’ risk aversion. Therefore, the Federal Reserve decided to start providing loans to the non-financial sector for the first time ever.

The spreading of the financial crisis to economies outside the US went hand in hand with continuous downgrading of economic growth projections and downward revisions of future oil demand. This brought oil prices down from more than USD 140 per barrel in July to less than USD 70 in the course of October, the lowest level in more than a year.

As contagion by the crisis of the euro area banking sector has recently turned out to be worse than expected, downward revisions of economic growth have been larger in the euro area than in the US. Consequently, the euro has lost more than 15% of its value against the US dollar since mid-July. The euro has witnessed a similar drop against the Japanese yen.

Effects on the real economy

Although it is clear that the current crisis will generate large negative effects on the real economy, it remains very difficult to grasp the exact magnitude of these effects as it is currently impossible to evaluate how long it will take before the extreme uncertainty related to the financial crisis starts to fade.

The most important channel through which the real economy will be affected is the credit crunch and the associated significant increase in financing costs. Financial institutions have to restore their balances, forcing them to be less willing to lend money. Moreover, due to the problems on the interbank market, they are paying much higher rates to obtain funds. Consequently, banks are becoming more reluctant to grant loans, and if they do so, they are likely to charge higher rates. This will certainly restrain housing investment, consumption of durable goods and investment by SME’s. Firms that turn to the stock or bond market to finance investments will face the same difficulties because these markets have almost dried up. Self-financing of investment might also become more difficult as firms’ profits are expected to
be squeezed due to the economic downturn.

The turmoil on the financial markets is weighing heavily on confidence indicators in the US as well as in Europe. Consumer and business confidence have reached their lowest level since the beginning of 2002, when indicators plummeted after the 9/11 attacks. This will reinforce the negative effects of the credit channel as it will lead to the postponement of investment projects and purchases of durable consumer goods. The only factor that is currently able to support confidence indicators is the decline in oil prices, which is shoring up households’ purchasing power somewhat and reducing downward pressures on firms’ profit margins.

The combination of these factors will also negatively influence world trade growth and thus exports in most economies. However, the recent depreciation of the euro could help to mitigate this effect in euro area countries.

How have macroeconomic forecasts been influenced?

The current state of the economy is very unstable and difficult to evaluate. Consequently, it is particularly complicated to produce short-term forecasts at present. GDP growth forecasts have generally been revised drastically downwards since the aggravation of the turbulence on the financial markets at the end of 2008Q3. Revisions for 2008 have been rather limited, while 2009 is affected more seriously. The IMF revised its forecasts for 2009 euro area economic growth from 1.2% in April 2008 to 0.2% in October 2008. Consensus forecasts of The Economist, which are published monthly, were revised from 1.2% in August 2008 to 0.6% in October. However, further downward revisions cannot be excluded as the above-mentioned forecasts do not seem to have taken the current situation in the financial sector fully into account.