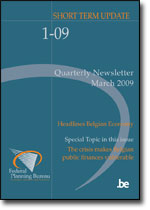 In 2008Q4, the financial crisis and the recession faced by the main trading partners took their toll and caused Belgian GDP to fall by 1.3% qoq. According to our February forecast, Belgian economic activity should continue to contract in the course of 2009 and only stabilise in the fourth quarter. As a consequence, Belgian GDP is projected to fall by 1.9% in 2009, after an increase of 1.1% in 2008. Despite the considerable downward revision of Belgian GDP growth for 2009 (last September a positive economic growth of 1.2% was forecast), the uncertainty surrounding this forecast remains exceptionally large and downside risks are likely to be greater than upside risks.

Belgian exports should fall by 4.6% this year, after an increase of 2.2% in 2008. Imports should decrease less than exports. Despite the drop in oil prices and the appreciation of the euro, the current account balance should remain negative and reach -1.8% of GDP in 2009.

In 2008, private consumption increased by 0.9%. The negative growth of private consumption in 2009 (-0.4%) is mainly due to historically low consumer confidence and negative wealth effects caused by the drop in asset prices. This should lead to a strong rise in the households' savings rate (up to 15.8%). Worsened demand prospects, the decline in business profitability, falling capacity utilisation rates and tightened lending conditions should exert a drag on business investment in 2009, which should fall by 4.6%. Household investment growth should also turn negative in 2009 (-1.6%), although this contraction will be mitigated somewhat by a temporary VAT reduction. Only public consumption and public investment growth rates are expected to remain positive.

Despite high underlying inflation during the first half of 2009, total inflation, as measured by the yoy increase in the national index of consumer prices, should continue to decrease and even become slightly negative during summer. Only in the second half of this year should the expected oil price increase be reflected in inflation evolution. According to our inflation update of March, average inflation should decline from 4.5% in 2008 to 0.5% in 2009.

The current crisis makes Belgian public finances vulnerable in three ways: the heightened risk resulting from the government's interventions aimed at supporting financial institutions, the budgetary impact of the economic slowdown, and the hardly reversible character of some of the measures contained in the recovery plan. The weakening of Belgian public finances appears in a context of continued concerns as to the sustainability of public finances in the long term and uncertainty surrounding the future of fiscal federalism in Belgium.

Every year, given the schedule of securities in circulation, around 10% of the long-term public debt needs to be refinanced, as does the entire short-time debt and the current year's deficit. This leads to considerable amounts of issuing because of the size of the debt, which reached EUR 308bn at the end of 2008 (about 80% of which was long-term), i.e. 89% of Belgium's GDP. Thus, the interest rate at which the state borrows is an important variable in fiscal policy.

The financial crisis induced a flight to safety and liquidity by investors. The states, which are considered as debtors with an almost endless solvency because of their possible recourse to taxpayers, did not have to face the same tightening of credit conditions as financial or non-financial businesses. Nevertheless, the yield spread for securities issued by the various states has widened considerably: the states that are considered as more risky debtors because of the level of their debt or deficit are required to pay higher interest rates. In the euro area, this particularly affects Greece, Ireland, Portugal and Italy, followed by Belgium and Austria.

Over the 2003-2007 period, the gap between the rates for 10-year bonds issued by the Belgian state and the German Bund never exceeded 10 basis points on an average annual basis. By mid-February 2009, this gap had widened to more than 120 basis points. This gap can be seen, at least partly, as the risk premium requested by investors who take the view that Belgian public finances have become more vulnerable.

Since autumn 2008, many European states have intervened to support their financial sector, either through recapitalizations, takeovers or guaranteeing. Those interventions are deemed necessary to avoid a failure in payments systems and to limit credit contraction, which weighs on economic activity.

The financial sector is strongly developed in Belgium. Furthermore, since the 1990s, it has gone through a number of mergers and acquisitions: four groups (Fortis, Dexia, KBC and ING) account for 82% of all bank deposits and 44% of all insurance premiums (2004 figures), a situation that increases the systemic risk in the event of bank failure. Both the size of the financial sector and its level of concentration are factors that may undermine public finances as the government intervenes to support the sector.

Public funds injected in Belgian financial institutions have been collected mainly through borrowing (and, for the lesser amounts, through sales of assets or available cash in the case of the interventions by the Regions). If those interventions have been made at (efficient) market value, the state's net assets are unchanged. On the liabilities side, the various transactions amount so far to EUR 23bn (of which EUR 20bn are at the federal level), i.e. 6.5% of the 2009 GDP forecast. Over a full year, interest charges roughly amount to EUR 1bn, i.e. 0.3% of GDP. As opposed to these charges, which are certain and predictable, the counterpart on the assets side - shares in Fortis, Dexia, KBC and Ethias - are unsure investments, both for yields and capital.

Moreover, the state now guarantees inter-bank loans subscribed by systemically important Belgian banks, subject to a fee reflecting the advantage obtained. To date, the state has committed to covering a maximum amount of EUR 241bn, i.e. 69% of the 2009 GDP forecast, of which EUR 50bn are already effectively guaranteed (on March 4th). Furthermore, the state also guarantees up to EUR 100 000 on private bank deposits and life insurance contracts. The state's exposure in this area is potentially significant: for reference, in 2007, the total amount of private customers' deposits in credit institutions under Belgian law amounted to 86% of GDP. Finally, the law of 15 October 2008 gives the National Bank of Belgium a state guarantee for loans aimed at supporting financial stability, which enables the BNB to provide -possibly very high amounts of - liquid assets to banks in difficulties.

The risk exposure of the state assets has therefore increased. The amounts involved greatly exceed the annual state budget and even the GDP, which ultimately forms the financing basis of a state through taxation.

The financial crisis has rapidly affected the real economy through loss of confidence, negative wealth effects and a credit squeeze for households and businesses. Consequently, demand, notably for durable goods, investments and exports, has dropped. The economic downturn is increasing budget deficits through automatic stabilizers: tax revenue falls because it is linked to the evolution of the various tax bases, while expenditure either rises because of the crisis - for example unemployment expenditure - or evolves independently from the economic cycle.

In October 2008, the government drew up its 2009 budget on the basis of GDP growth of 1.2%. This scenario, now viewed as much too optimistic, would in any case have led to difficulties in balancing the budget as this growth rate of GDP remains below the normal growth rate of a large part of public expenditure, e.g. social expenditure and civil servants' pay. The FPB now expects negative growth in 2009 (-1.9%), followed by almost zero growth in 2010. Hence, the public deficit (including the recovery plan) should amount to more than 3% of GDP in 2009 and about 4.5% in 2010. Those figures are all the more negative because no budget surpluses were built up in good times.

In view of the recession, states are taking countercyclical policies in order to mitigate the economic downturn, to prevent the bankruptcy of non-financial businesses and to limit the scale of restructuring. Those policy measures should respect the Stability and Growth Pact, which authorizes budget deficit deepening through the 'exceptional circumstances clause'. In November 2008, the European Commission invited Member States to undertake coordinated actions which should be timely so as to answer today's challenges, targeted in order to obtain maximum stabilization from the limited budgetary resources, and temporary to prevent a structural deterioration of the budgets (this implies that the policies are reversible).

In Belgium, both the regional plans and the federal plan include measures to facilitate access to credit and venture capital and the front-loading of public and public- private investment schemes. At the federal level, the stimulus package includes measures to foster housing investment, improve the cash accounts of businesses and support households' purchasing power, as well as labour cost reduction initiatives. The initiatives aimed at reducing labour costs represent nearly half of the budget of the federal plan (about 0.3% of GDP out of a total of 0.6%). They facilitated the conclusion of the Inter-professional Agreement 2009-2010 as they seek to lower, by means of the budget, the Belgian structural competitiveness problem that existed before the crisis. Consequently, those initiatives will not be so easy to reverse. A structural negative impact on the budget can be worrisome within a context of unsustainable public finances.

With the first assessments in the nineties of the ageing cost, the sustainability problem became noticeable. A 'front-loading'-type strategy aimed at facing the ageing cost was officially adopted by the Belgian authorities, and laid down in the successive Stability Programmes and in the Ageing Act through the creation of an Ageing Fund. This Fund was supposed to be fed by resources obtained from the federal debt reduction, i.e. from margins resulting from lower interest payments. It was created to finance the future increase in pension expenditure without having to resort to an increase in taxation or to a reduction in the provisions of the welfare state.

In reality, this strategy has never been followed. Since 2000, the reduced interest payments have been fully absorbed by the structural decline in the primary surplus (down from almost 7% of GDP to 3.5% of GDP in 2007). This resulted in a balanced budget, by and large, during two legislative terms. Despite the amounts paid here and there to the Ageing Fund (coming from one-shot measures), this fund has so far proved useless: it would only have made sense if structural budget surpluses had been achieved. The laxer budgetary policy and, accordingly, the slowdown in debt reduction, lead to an increase of the gap between the structural primary surplus and the level at which it could ensure long term sustainability: in June 2008, the Federal Planning Bureau estimated this 'sustainability gap' at 1.7% of GDP.

A recent update, of February 2009, revised the sustainability gap to 3.8% of GDP. This worsening is due to a downward revision of the medium-term potential  growth, to structural budgetary measures that were taken in the meantime and, to a lesser extent, to the impact of bank recapitalizations on the gross debt. A fiscal scenario without correcting measures would not be sustainable: the deficit would never fall below 3% of GDP; the debt would set off on an explosive trajectory from 2020 onwards, leading it to more than 200% in 2050. In case of further or more lasting decline of the potential growth than supposed here, the outlook for sustainability at constant policy should be even more pessimistic.

The question remains when and to what extent sustainability policies will regain priority, while the crisis has put stabilization policies in the forefront. Furthermore, the Belgian sustainability strategy will inevitably have to be revised: no margin can be expected from a decrease in interest charges by a structurally in deficit federal government. The social partners, as well as the federated entities, will necessarily be involved in a redefinition of the long-term strategy, within the framework of an overhaul of fiscal federalism in Belgium, including the question of the financial relationship between the federal government and social security.