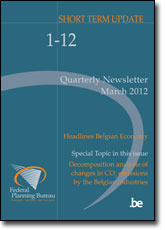 Since the start of 2012, tensions in money and bond markets have receded somewhat in most euro countries. Together with the recent uptick in most confidence indicators, this is expected to lead to a bottoming out of European GDP. Assuming the sovereign debt crisis does not intensify again, economic activity should gradually pick up in the second half of the year. Nonetheless, on a yearly basis, this implies negative euro area GDP growth of -0.3%, which is a substantial downward revision as compared to our September forecasts (1.2%). This scenario remains highly uncertain, with renewed turmoil in financial markets as the main risk.

Belgian economic growth amounted to 1.9% in 2011, although economic activity fell slightly during the second semester. In 2012, quarterly growth should remain very modest against the background of a gradual pick-up in the European business cycle and of the austerity measures already taken by the Belgian government. Economic activity ought to stabilize in 2012Q1, followed by a slight export-led upturn (up to qoq growth of 0.2% in 2012Q4). Economic growth should remain limited to 0.1% on a yearly basis.

Due to the lack of dynamism in the business cycle, job creation has stagnated since mid-2011 and should only slightly recover in the course of this year, leading to an average annual increase of 6 400 units in 2012. As a result, the harmonised unemployment rate (Eurostat definition) should rise from 7.2% in 2011 to 7.5% in 2012.

Our most recent inflation forecasts were finalised at the end of February. Belgian inflation, as measured by the yoy growth rate of the national consumer price index, should amount to 3.0% on average this year. This upward revision (compared to our 2.7% forecast at the end of January) is largely due to price increases for energy products as a result of higher oil prices.

Special Topic : Decomposition analysis of changes in CO2 emissions by the Belgian industries

Emissions of carbon dioxide, the most important greenhouse gas, have been a major focal point in policy making during the last decade. In the context of the Kyoto protocol many countries, including Belgium, assumed the task of decreasing such emissions. Production, by private enterprises or by the government, was responsible for the largest part of Belgian CO2 emissions - specifically, 75% in 2008. Within the Belgian National Accounts Institute, the Federal Planning Bureau has been assigned responsibility for the environmental satellite accounts, an environmental database consistent with the National Accounts. Two of these accounts, the Physical Energy Flow Accounts and the Air Emissions Accounts, contain data on the basis of which the driving forces behind the changes in CO2 emissions by the Belgian producers can be investigated by means of decomposition analysis.

Decomposition analysis allows changes in CO2 emissions to be broken down in terms of the impact of volume changes, namely economic growth and changes in the structure of the economy, and the impact of efficiency changes. These efficiency changes can be linked to either energy efficiency or the emission intensity of the energy mix. The first part of the text briefly explains the methodological issues. The following parts present the decomposition results for CO2 emissions by the Belgian industries between 1995 and 2008.

This can be formalised as follows:

Changes in CO2 emissions can then be expressed as a weighted sum of the right-hand side variables in equation (1).2

Total Belgian producers’ CO2 emissions decreased by 9% between 1995 and 2008. Real economic growth during that period equaled 31%. This implies an absolute decoupling of CO2 emissions from economic growth. This is explained by changes in the energy mix, energy intensity and the structure of the economy.

1. These are the 60 NACE Rev1.1 two digit industries, except for mining and quarrying for energy producing materials and metal ores, and activities of households. For these industries at least one of the variables involved in the analysis is equal to zero over the entire period.

2. A thorough explanation of the specific decomposition method, which considers only isolated effects and uses a mixed evaluation, can be found in Seibel, S. (2003), Decomposition analysis of carbon dioxide emission changes in Germany, Eurostat Working Papers and Studies, Theme 2, February.

[ More in the pdf version ]