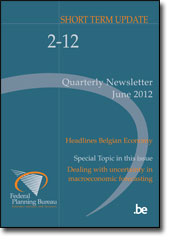 Presenting forecasts under the form of point estimates offers the advantage of their being easy to understand by the public and is also required by policy makers. This is especially true when macroeconomic forecasts are established for the elaboration of the government budget, as is the case with the economic budget. Nonetheless, point estimates may give a misleading impression of precision since macroeconomic forecasts are actually surrounded by considerable uncertainty. This issue of
uncertainty in forecasting can be addressed quantitatively in several ways.

A second method entails the construction of confidence intervals for the forecasted variables. These confidence bands may be symmetric as is, for instance, the case with the ECB/Eurosystem staff projections, where the size of the “projection range” is set to be equal to twice the historical outlier-corrected mean absolute projection error. The range tends to widen over the projection horizon - reflecting the increased uncertainty surrounding projections when moving further into the future - and is
generally larger for variables with higher intrinsic volatility. The confidence interval can also be asymmetric to reveal unbalanced risks, as is done by the Bank of England for its inflation forecasts or by the IMF for its world GDP growth prospects. Past forecast performance as well as judgment or information embedded in market indicators is used to quantify the balance of risks associated with the central scenario.

When projections are model-based, confidence intervals can also be constructed through stochastic simulations of the model, exploiting the probability distribution of the coefficients and the residuals of the econometric equations. Uncertainty associated with the assumptions of the exogenous data series can be added to the stochastic simulation process but uncertainty related to other external information, based for instance on expert opinion and introduced into the model by add-factors,
is not included. For that reason, standard errors provided by stochastic simulations do not suffice for a forecast interval interpretation. Consequently, only the first two approaches will be illustrated hereafter, using the observations and forecasts in the economic budget of February 2012 as the central scenario.