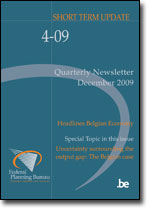 In view of the new round of stability and convergence programmes (SCP) by the EMU member states, the FPB transmitted a medium-term outlook for the Belgian economy to the federal government. In this outlook, the short-term international assumptions are based on the November forecasts of the EC. These assumptions result in a gradual recovery of Belgian GDP in 2010 (0.8%) and 2011 (1.6%), after a decline of 3.1% in 2009. More information on this simulation can be found on pages 5-6.

As world trade appears to recover at a faster pace than expected in the EC outlook, the FPB produced a technical update of the SCP-simulation. This second simulation results in relatively stronger Belgian economic growth in 2010 and 2011 (1.1% and 1.7% respectively). From 2012 to 2014 economic growth is expected to be 2.1% on average, which might not be sufficient to close the output gap by 2014. Comments in the next paragraphs are based on this exercise.

Private demand was heavily affected by the financial and economic crisis. Private consumption suffered from a lack of confidence which brought an important increase along in the savings rate in 2009. In the medium term, consumption growth should gradually recover but remain below 2%. Gross fixed capital formation plummeted in 2009 and is unlikely to recover soon as idle production capacity is still abundant. From 2011 to 2014, average investment growth should amount to 2.1%. Exports declined by more than 10% in 2009, but should recover from 2010 onwards and reach an average growth rate of 4.4% from 2011 to 2014.

Due to the recession the public deficit increased to 5.8% of GDP in 2009. Under an unchanged policy assumption the net public financing requirement should decline by 0.6% of GDP in 2010 and roughly stabilise somewhat below 5.5% in the medium term.

Because they allow the medium-term non-inflationary growth path of the economy to be determined and the cyclical component of the budget balance to be identified, the concepts of potential growth and output gap have become essential ingredients in the European fiscal surveillance process. The estimation of these is, however, surrounded by a degree of uncertainty that can be substantial when the economy is exposed to large shocks. Consequently, the ongoing financial and economic crisis has led international organisations and many national authorities to revise their ex post measurement of the output gap. The current uncertainty regarding output gap estimates can be illustrated in various ways. One approach consists of comparing the estimates produced by a particular institution before and after the outbreak of the crisis. The comparison between estimates from different organisations constitutes another way of illustrating the uncertainty.

Potential output is an aggregate indicator of the supply- side capacity of an economy, whilst the output gap, defined as the percentage deviation of the actual level of output from the potential level, is an indicator of the state of the business cycle. Estimating the output gap is not straightforward since potential output is not directly observable. It may be computed through a variety of methods. Most international organisations rely on a method based upon a macroeconomic production function that allows potential output to be broken down into contributions from input factors and total factor productivity. In order to identify the underlying trends, this methodology uses statistical filters to smooth some of the input series. Due to the well-known end-point problem (difficulty of disentangling the cycle from the trend at the end of the sample) a widespread approach consists of applying a filter to a historical series that is supplemented by projected values. Following this approach, the Federal Planning Bureau uses its medium-term scenario for the Belgian economy, produced with the HERMES model, to compute potential GDP.

The FPB’s potential growth estimates based upon, respectively, the May 2008 and December 2009 medium-term economic outlooks (see pages 5-6), are given in Graph 1. This comparison reveals important downward revisions as potential growth is reduced by 0.75%-point in 2009 and close to 1%-point in 2010. It is notable that potential growth estimates for the years prior to the crisis have also been reduced significantly. These revisions reflect the view that the economic growth recorded during the years preceding the burst of the financial bubble was in fact unsustainable and fuelled by an excessive expansion of credit. This view has been challenged by some economists, claiming that a large positive output gap prior to the crisis would be in contradiction with the absence of substantial upward pressure on core inflation. However, others argue that central banks were actually lulled by global disinflation and that in fact inflationary pressures materialised in the form of credit and asset market bubbles and tensions that reflected in commodity prices.

The level of potential output in 2014, as estimated in the medium-term economic outlook of December 2009, is about 6% lower than that computed in May 2008. The most important factor behind this revision, especially for the period preceding the crisis, is total factor productivity which accounts for 3.8%-points. The contribution of labour has been revised downwards by 1.7%-points while the revision of the contribution of capital accounts for a mere 0.4%-point. In the methodology used here to compute potential GDP, the contribution of total factor productivity and labour input are cyclically adjusted through the use of statistical filters. In contrast, capital input is not adjusted because it is assumed that it already represents its potential contribution to output. This explains why the contribution of capital has not been revised for the past.

The downward revisions of potential GDP suggest, for the period between 2004 and 2008, a much more positive output gap than previously estimated. Business cycle conditions now appear to have been very favourable during this period, while in May 2008 they were still considered to be relatively neutral with an output gap close to zero. This tendency to underestimate cyclical conditions in “good times” is not a novelty: a similar episode of revising the output gap upwards happened at the beginning of this decade after the burst of the ICT bubble and the subdued economic performance that followed.

The output gap estimated by the FPB is in line with that published by the European Commission in the Autumn 2009 release of its economic forecasts. The EC methodology uses univariate time series models to construct projections beyond the forecasting horizon, which suggest a progressive re-emergence of long-run historical patterns for capital accumulation and total factor productivity.

The OECD has a different approach. Firstly, considering that a sizeable positive output gap before the outbreak of the crisis would be inconsistent with the recorded core inflation, it uses a set of projections made prior to the crisis to compute historical values of potential output. Secondly, it considers only the consequences of the shock, i.e. a reduction in the equilibrium level of the capital stock and an increase in the structural unemployment rate, although it assumes that some of that increase will be reversed over time.

These differences in potential growth estimates have, of course, important implications for the output gap. While both institutions have comparable values until 2005, the OECD has a much smaller excess demand gap in 2008 and consequently a much more negative output gap in 2009-2011. Despite this much lower starting point, the collapse in potential output assumed by the OECD beyond 2011 implies that, in order to close the output gap by 2017, there will be a lower average actual GDP growth rate (1.8%) than that projected by the FPB (2.1%).

These differences in diagnosis concerning the state of the business cycle and the medium-term non-inflationary growth path of the Belgian economy make any evaluation of the current and future fiscal position very uncertain.