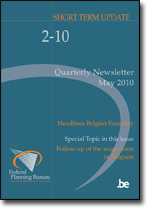 The new medium-term outlook for Belgium is based on an international context that is marked by a stronger-than-expected recovery, particularly spurred on by the large Asian emerging economies and the American economy. Nevertheless, the uncertainty surrounding these forecasts continues to be higher than before the financial crisis. The important budget deficits and global trade and capital flow imbalances continue to threat the stability of worldwide economic growth.

The yearly growth of the Belgian economy should amount to 1.4% in 2010 and 1.7% in 2011 and exceed 2% in 2012-2015. After a sharp decline in 2009, domestic demand should start rising again in 2010, despite the ongoing fall in business investment. As of 2011, domestic demand should rise at an average yearly rate of just above 2% as its various components regain their trend-based growth. Belgian exports, which fell by 11% in 2009, are expected to recover from 2010 onwards. The contribution of net exports to GDP growth should be largely positive in 2010 (+0.7%-points) and weaken from 2011 onwards (+0.2%-points on average) due to the acceleration in domestic demand.

Belgian inflation should not exceed 2% on a yearly basis as the limited increase in nominal unit labour costs (average annual growth of 1% during the period 2010-2015) should keep underlying inflation in check. However, this limited increase masks a decline in 2010 followed by a gradual acceleration to 2% in 2015.

The general government budget deficit should shrink from 5.9% of GDP in 2009 to 4.8% of GDP in 2010. However, under the assumption of constant policy, the deficit should again exceed 5% of GDP from 2011 onwards. A further and considerable fiscal adjustment is thus necessary to cut back the deficit to 3% of GDP in 2012 and achieve a balanced budget in 2015 in accordance with the Stability Programme of January 2010.

Special Topic :Follow-up of the wage norm in Belgium

In the face of increased exposure to global economic pressures in general, and increased wage competition within the EU in particular, calls for framing the free wage negotiations at industry and firm level into a more institutionalised arrangement had grown louder in Belgium in the late 1980s. As a result, the Law of 26 July 1996 on employment and competitiveness came into effect. In a bid to internalise the international economic environment, the law entrenches the biennial wage negotiations between labour unions and employers into a wage norm. It defines anticipated nominal foreign wages as the upper bound for wage negotiations in Belgium.

The benchmark is the weighted average of expected wage cost increases in Belgium’s neighbouring countries (France, Germany, the Netherlands). In practice, Belgian gross wages in real terms (deflated by the health index) are set in advance so that the negotiated nominal wage does not exceed the OECD forecast of wage increases abroad for given anticipated domestic inflation and employers’ Social Security contributions. The 1996 Law also prescribes that the wage norm should be less than the anticipated increase in foreign wages if the previous bargaining round has resulted in domestic wages rising faster than foreign wages, but this safety valve is not triggered automatically and has not been invoked yet.