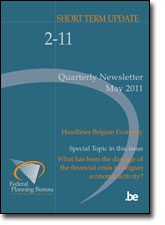 The new Economic outlook for Belgium for the period 2011-2016 is based on a context that is characterised by a stronger-than-expected recovery of the world economy, spurred on in particular by the Asian emerging economies and the US economy. Three main risks could undermine this international scenario: the budgetary position of several countries and the financial risks that this may entail; the volatility of commodity prices; and the overheating of several emerging economies.

Belgian GDP growth should amount to 2.2% in 2011 and in 2012, affirming its outperformance compared to the euro area since the start of the crisis. This growth rate should persist in the medium term. In 2011 and 2012, domestic demand growth should accelerate, backed by private consumption and business investment. Public investment should be highly dynamic in the run-up to the local elections of 2012. After an impressive increase in 2010, exports are expected to increase at a slower pace in 2011 and 2012 due to the deceleration in world trade growth. From 2013 onwards, growth in domestic demand and exports should remain close to historical average rates.

Belgian inflation should accelerate considerably in 2011 (3.5%), mainly due to a steep increase in raw material prices. Without new shocks on commodity prices, inflation should stabilise around 2% in the medium term.

Belgian employment coped remarkably well with the crisis. The rise in employment in the enterprise sector in 2010 (+27 000 persons) had already compensated for the decline in 2009. This performance seems to be related mainly to the so-called temporary unemployment system and the further increase in the number of people working in the government-subsidised voucher programme for domestic-type services. From 2011 onwards, employment in the enterprise sector should increase by roughly 46 000 persons per year. The number of unemployed should decline by 8 000 units in 2011 and by 3 000 units in 2012, followed by a strengthening in the annual decline in unemployment of up to 16 000 persons in 2016. The unemployment rate (broad administrative definition) should fall from 12.6% of the labour force in 2010 to 11% at the end of the projection period.

The general government deficit amounted to 4.1% of GDP in 2010 and should shrink to 3.8% of GDP in 2011, taking into account the budget information up to mid-April. Under a constant policy assumption, the public deficit should increase significantly in 2012 (4.4% of GDP) and decline gradually from 2013 onwards to reach 3.6% of GDP in 2016. The deficit reduction path, which aims to achieve a balanced budget in 2015, requires structural consolidation measures amounting to 17 billion euro.

Special Topic : What has been the damage of the financial crisis to Belgian economic activity?

A consensus quickly emerged among national and international organisations, based on past experiences, that the financial crisis that erupted in 2008 would have a long-lasting impact on the level of output. Those same institutions acknowledged that the expected magnitude of the adverse effects remained a major uncertainty as the financial crisis could affect output through a variety of channels. In the literature, a methodology often used to assess the economic underperformance (“output loss”) resulting from a financial crisis is to compare the medium-term level of output to the level it would have reached if it had followed the pre-crisis trend.

An evaluation of the impact on GDP

Without the necessary hindsight, a way to evaluate the medium-term impact of the latest financial crisis on Belgian output is to compare the level of economic activity as projected by the Federal Planning Bureau (FPB) before the outbreak of the crisis with the results of similar exercises after the crisis hit. As a benchmark we are using the May 2008 release of the FPB’s Economic Outlook. Firstly, we will compare it with the results of the May 2009 edition, which represents an initial attempt to quantify the short- and medium-term impact of the crisis on Belgian economic activity. We will consequently examine the revisions entailed by the latest data, extended with the May 2011 Outlook.

The upper line of Graph 1 represents the trajectory of real GDP (scaled to 100 in 2016) as projected in May 2008 and the lower line the evolution of GDP according to the May 2009 release. The distance between the two lines measures the initial evaluation of output loss attributable to the financial crisis, which is estimated at 7%. The intermediate line corresponds to national accounts data up to 2010, extended with the projection taken from the May 2011 Economic Outlook. It reveals that the recession in Belgium was less steep than initially feared and that the recovery in 2010 was faster and stronger than expected. It is fair to say that the unprecedented monetary and fiscal policy response at the global level as well as the remarkable resilience of emerging and developing countries played an important role in cushioning the shock caused by the turmoil on the financial markets. The performance of Belgian economic growth in 2010 was also boosted by the unexpectedly strong rebound in German exports.

All these factors explain why the estimate of output loss attributable to the financial crisis is now projected to be less than 5%. This downward revision is in line with the findings of a comprehensive study produced by the IMF based on a large sample of past banking crises. According to this study, the first-year loss is a good predictor of the medium-term impact, and macroeconomic stimulus in the short run and a favourable external environment are generally associated with smaller medium-term output losses. This new estimation is also very close to that computed by the CPB for the Netherlands using a comparable methodology.