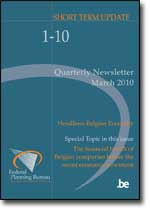 According to our February forecast, quarterly GDP growth should remain limited to 0.3% on average in the course of 2010, which is about half of the quarterly growth in the second half of 2009. This slowdown is in line with the international business cycle, which should temporarily lose momentum to the extent that monetary and budgetary stimuli fade and restocking comes to an end. In the course of 2011, exports should pick up and domestic demand should gain momentum, resulting in average quarterly GDP growth of 0.6%. On a yearly basis, Belgian GDP should increase by 1.4% in 2010 and 1.7% in 2011, after a drop of 3% last year. This means that real GDP should remain below its pre-crisis level until late 2011.

Headline inflation in Belgium, as measured by yoy growth of the national index of consumer prices, was negative from May to November 2009, which was mainly due to the negative impact of energy prices. As a result, overall inflation remained just below zero in 2009. At the end of last year, the base effect of the drop in energy prices had disappeared. Combined with a gradual increase in oil prices, headline inflation should rise to 1.7% in 2010 according to our inflation forecast of March.

The financial health of Belgian companies before the recent economic downturn

With real GDP increasing by 2.9%, 2007 ended a four-year period of substantial economic growth in Belgium, before - as in most other countries - the global financial crisis of 2008 resulted in a dramatic economic downturn in 2009. The year 2007 therefore seems a good benchmark year for assessing the financial health of industries in good times, on the eve of a period of economic recession. Using data from the annual accounts of Belgian companies, the financial health or fragility of industries can be analysed through indicators that reflect the profitability, solvency and liquidity of companies. This has been done for manufacturing industries and non-financial market services (i.e. excluding insurance and financial companies). In 2007, some 10% of companies were performing poorly on the three indicators of financial health. These companies accounted for 2.7% of employment or 47 605 employees, indicating that, by and large, financially fragile companies are small. The financial fragility of some industries in 2007 may have foreshadowed the problems that they were to face with the economic recession in 2009, although this should be confirmed through future analysis, based on data for more recent years.

The ability of companies to make profits on a structural basis determines their long-term financial health and probability of survival as it reflects the degree to which they succeed in selling goods or providing services with a margin over costs that justifies the risk of the capital invested in the company.

As shareholders expect a premium for the risk they incur by investing their money in a company, equity is more expensive than debt financing at a fixed market rate. Leveraging through debt permits companies to increase their return on equity. However, debts imply costs and repayment, irrespective of the profitability of a company. If a company is overleveraged, it may no longer be able to repay its debts - even if it is profitable - and may thereby risk bankruptcy. It is therefore important to strike the right balance between profit-enhancing leveraging and financial independence and solvency.

The liquidity of a company reflects its ability to meet short-term obligations through its available income, e.g. cash flow or assets that can be sold on short notice. It can be considered as a solvency measure with regard to short-term debts. A company that is profitable and solvent can face liquidity problems, although under normal circumstances it should then be able to attract additional financing to repay its short-term debt. If companies fail to attract the money necessary to solve liquidity problems, as has been the case as a consequence of the global financial crisis, a liquidity problem may turn into a more severe solvency problem.

Annual accounts for the year 2007 have been considered for a total of 275 839 Belgian companies (accounting for 1 738 163 employees): 8% in manufacturing industries, 14% in construction and utilities (water and energy) and 78% in services. On average, companies performed rather well in terms of profitability (75% of the companies were profitable in 2007) and solvency (63% of the companies met the norm of long-term solvency). Liquidity was somewhat more of a concern, especially for large companies, which faced a net current assets shortage of EUR 35.5 billion.

In Table 1 the financial health of 25 industries is summarised, based on the performance of companies with regard to profitability, solvency and liquidity.