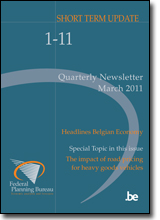 Last year, the global economic recovery after the 2009 recession turned out to be stronger than initially expected. The phasing out of stimulus measures, a deceleration of world trade growth, and public deficit reduction measures are expected to weigh on economic growth in the euro area this year. However, the German economy should continue to grow noticeably faster than the euro area average and impact positively its neighbouring countries (including Belgium). The international economic context remains highly uncertain, among other factors with regard to the future evolution of oil and other raw material prices.

In the wake of the Germany’s strong growth performance, combined with a catch-up in construction activity after the cold winter, Belgian GDP increased sharply in 2010Q2 (1.1%). The growth deceleration in 2010Q3 (0.4%) was therefore hardly surprising, all the more so because export market growth was already expected to slow down in the second semester. In the course of 2011, Belgian export growth should pick up again and domestic demand growth should strengthen, owing to investment especially. As a result, GDP growth should gradually improve from 0.5% in 2011Q1 to 0.6% in 2011Q4. On an annual basis, Belgian GDP growth is estimated at 2% both for 2010 and for 2011.

Despite the rise in labour productivity and working time, the number of jobs has been increasing again since the beginning of 2010. During the first half of this year, employment growth should weaken slightly owing to an acceleration of productivity growth, but should regain momentum thereafter. The number of employed persons is expected to increase by 28 500 on average in 2010 and by 37 600 in 2011. Considering the evolution of the labour force, the number of unemployed should fall by 4 600 on average this year. Therefore, the harmonised unemployment rate (Eurostat definition) should stabilise at 8.4%.

Measured by the yoy growth rate of the monthly consumer price index, Belgian inflation was on the rise in the course of 2010 as a result of a steady increase in commodity prices. Underlying inflation was also on an uptrend as from May 2010 and should increase further as the recent rise in commodity prices feeds into prices of other goods and services. According to our most recent inflation forecasts, finalised at the end of February, the inflation rate should increase from 2.2% in 2010 to 3.3% in 2011.